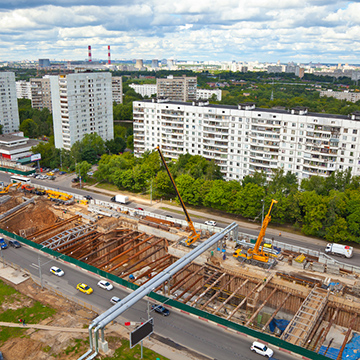 The Meyers Nave Construction and Facilities Group (CFG) opened in 2013 with a single focus on the construction industry and a commitment to excellence in the practice of construction law. CFG lawyers understand the construction industry – the laws, the issues, the technologies, and the language. CFG lawyers understand the challenges faced by owners, designers, contractors, subcontractors, construction managers, and specialty consultants. Whether planning projects, counseling on claims resolution or actively litigating a construction claim, we work toward each client’s business objectives. We share our clients’ sense of urgency to find the best solutions to construction problems and we provide legal solutions that make business sense.

Since opening, CFG has settled construction claims throughout the litigation and arbitration process, often following dispositive motions, including a summary judgment on an eight-figure contractor claim on a state highway; and a dismissal in the face of a summary judgment on a seven-figure contractor claim on a college facility. CFG has defended eight-figure claims through discovery that then settled at the amount of the pre-litigation settlement offer; recovered seven-figure settlements in mediation; and counseled clients through default terminations, litigation and settlements of claims exceeding $100 million.

CFG attorneys devote a substantial amount of time to project oversight and pre-litigation counseling on troubled projects, procurement and bidding disputes.  CFG’s focus is consistent: understand the client’s objectives; recommend pragmatic solutions; move the project forward.  Whether the objective is project completion, revenue generation, or cost management, the focus is the same – forward progress. Every construction project is different and every construction dispute involves unique facts, technology, processes and contracts. CFG will review the drawings, walk the project, meet the staff in the trailers, study the job photos. CFG evaluates claims of all types on projects as varied as process facilities, hospitals, heavy civil projects, or government office buildings; with claims pertaining to design or construction defects, changed or unforeseen conditions, delays, disruptions, loss of productivity, acceleration, payment disputes and insurance coverage.

CFG provides realistic assessments of entitlement, damages, litigation costs, litigation risks and uncertainties, and measures these costs against the value of prompt dispute resolution. Whether CFG is counseling on settlement, reserving rights or preserving defenses, the immediate focus remains on completing the project and (where it applies) maintaining the revenue stream. In project counseling, CFG considers the litigation option as the option of last resort. Just as cost and schedule drive construction projects, cost and timely resolution should drive construction disputes. Whether by face to face negotiations, facilitated negotiations, mediations, mini-trials, referees or arbitrations, CFG will evaluate each case and recommend solutions to cost effective dispute resolution.

There is no “one size fits all” when it comes to contracts, and while CFG has forms of contracts it recommends, it has in-depth experience with the various standard industry and government forms-including the contracts of the American Institute of Architects (AIA), Consensus DOCS, the Engineers Joint Contracts Documents Committee (EJCDC) and the Construction Management Association of America (CMAA).