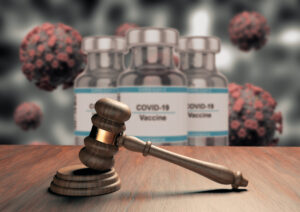 On January 13, 2022, the Supreme Court of the United States (“SCOTUS”) issued its decision staying the enforcement of OSHA’s rule requiring either vaccination or masking and testing for workplaces with over 100 employees (see the decision here).  The Court found that the Petitioners, a combination of Republican Governors, businesses and religious institutions, were likely to succeed on the merits of their claim that OSHA lacked the authority to impose these workplace requirements. The Court reasoned that the statutory framework governing OSHA allowed it to set workplace safety standards but did not permit it to regulate the public health more globally which it found falls outside OSHA’s sphere of expertise. The Court compared COVID-19 risks to the universal risks from crime or pollution which the Court said were general risks rather than workplace risks.

As expected based on oral argument, Justices Breyer, Sotomayor and Kagan penned a vigorous dissent.  They noted that COVID-19 is a menace in workspaces where there is person-to-person contact and that OSHA has the authority to address that threat.  The six justices in the majority, all agreed that OSHA’s vaccinate or mask and test requirement exceeded its authority and found that the requirement was an indiscriminate approach that failed to take into account the crucial distinction between occupational risks and risks more generally.  The case will now proceed before the Sixth Circuit for review on the merits with OSHA’s regulation being stayed by SCOTUS pending that disposition.  The Court’s ruling staying OSHA’s vaccine requirement does not invalidate vaccine requirements put in place by private employers, municipalities or states.  Instead, the ruling is based on the limited grounds that OSHA exceeded its statutory authority and this does not impact the validity of private, local or state imposed vaccine mandates.

The Court did note that OSHA could impose COVID-19 specific workplace requirements where the risks posed by the virus may be increased, giving the example of a workplace where researchers work with the virus. In line with this reasoning, in another ruling issued on January 13th, the Court found by a 5-4 vote that a federal rule from the Department of Health and Human Services requiring the vaccination of healthcare employees at facilities receiving Medicaid and Medicare funds was likely valid. Thus, this federal vaccine mandate remains in effect (see the decision here). The Court explained that this targeted vaccine mandate fit neatly within the statutory language granting authority to the Secretary of Health and Human Services as addressing infections at these facilities is what he does.